A shoebox and a pen.

Prolificacy. Yes, according to Webster prolificacy is correct usage. I checked. Anyhow, Prolificacy is something for which, I will strive.
I will start attending PA meetings. Procrastinators Anonymous. Morning, noon and night I will write.
I will finish this record. This month.
This is my mantra.

We've moved into a tiny little apartment, which I like to refer to as a Brooklyn style place, on Jenifer St. I say Brooklyn style due to it's lack of size. One room which serves as kitchen, dining and living space and a second that serves as a bedroom. It's quaint to say the least. Something I'm reminded of, having moved back into the hood, is an amazing lack in ability to properly park a car that seems to permeate this neighborhood. Now I know a Prius is a precious metal but it doesn't require two parking spots between these two driveways...especially on street cleaning day when the entire block is only allowed to park on one side of the street. It's also a neighborhood where people will wear on their sleeve their disdain for the governor and how they stand undaunted for workers rights(as do I), they will shop organically at the Willy St Co-op, they will proudly listen to Woody Guthrie and from the top of their lungs sing "This Land is Your Land"...but if you happen to park two feet over the curb therefore minimally blocking their driveway as to make them maneuver the Prius onto the street with a 13 degree turn of the wheel you had best be ready for a red faced, sweaty brow, all up in your space confrontation to make sure you never wrong them in such horrendous fashion again. Ever. On the brights side it's nice to have a grocery nearby and several places for a night cap within a very short walk. Hell, if you want you can get a lunch cap right around the corner. East a few blocks and it's third shift and time for a gin tonic to watch the sun rise. What I'm saying is that Hemingway would have loved it here. A writers paradise.

So now the routine is to begin writing everything. A task recently brought to me by Blake Thomas to journal like a madman. All day, every time a thought comes up find a way to make it onto a pad, in ink. Even go so far as to put these random things into a Western swing tune in 5/4." Write something fu*&&%$ crazy and sort it out later". So here we go. Wish me luck. 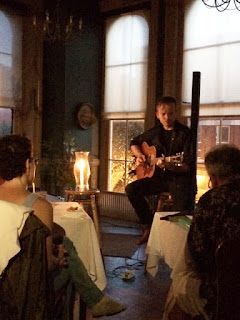