What's so great about Scotland, except everything?

It's 10 past 8 in the morning and I'll be damned if the sea gulls didn't decide to take the morning off...for the most part. Maybe they're on holiday due to the fact that the sun finally came out. First time since last Sunday. Don't get me wrong that doesn't means it's necessarily warm but I'm sure I'll see some locals out in shorts today, as well as a few convertible tops which are sure to be down.

We're in Carnoustie, which is in Angus, which is in Scotland. They say Angus is the birthplace of Scotland though to be honest with you I'm not exactly sure how to substantiate that claim. It's a nice quiet little town on the east coast just north of Dundee and south of Aberdeen. You'll see some oil rigs now and then in Dundee which are docked for repair and then they'll head up the coast and further out to see just up north. Damn those things are big.

Arbroath is just a few miles up the road north. A bigger town and home to the Arbroath Smokie. No doubt I've mentioned them before but for a little recap: Arbroath Smokies are a local delicacy and sadly we've never had them. With any luck we'll take advantage of the sun today and go have some by the harbor. I also need to stop by Abbey Music and buy a few plectrums, or picks as we call them back home. Most anyone reading this knows that I'm typically not one to employ the use of these little guys but I might try to push the envelope a little bit. This decision could also be motivated by the large amount of super glue I've been using to keep my right hand together.

Last night was a wee little show at a cafe called the AliBob (at Cairn O'Mohr Winery) over near Perth. Super funky place that started in the owners boot closet 29 years ago. People had to bring their wine jugs back each week for a refill of the strawberry, elderberry, ginger or raspberry wine they made. Now, they produce 300,000 bottles each year. And you get to keep the bottle. Anyhow, it was a great warmup to kick off this Scotland run.

Tonight I'll play at the Barry Mill which is an old flour/oat mill that dates back to 1539. The first concert they ever had there was April 16, 2016. The dude's name was Josh Harty.

Amendment: since writing this post this morning, I have tried Arbroath Smokies. . . . Delicious, but you have to watch out for the bones! 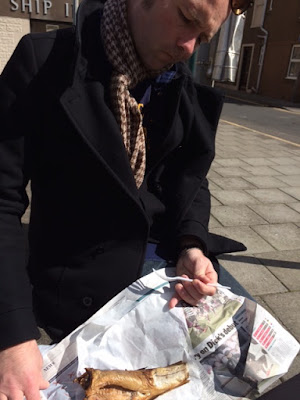