Rain and the Emerald Isle...

It's been a while since we've been to Ireland. The last time was 2 1/2 years ago when I drove to Stansted Airport and hopped a Ryan Air flight to Dublin without my guitar because Ryan Air sucks. I bought a seat for my guitar for 9 Pounds (same as my seat) but they said I'd have to pay an additional 50 because it fell under their musical instrument policy. Luckily this happened online before I left so I was able to scream at the computer and the Ryan Air guy I was chatting with and then call Roy at Ballymore Acoustic to see if I could use his guitar for the show that night. Anyhow, I arrived at the Dublin airport, fetched my Nissan Micra and headed to Ballymore Eustace. That night I shared a show with the lovely Amelia Curran, slept at Mag's B&B, was out the door by 9am the following morning and flew out of Dublin around 2pm...less than 24 hours after I'd arrived the day before. This time, we get 5 days.

Ballymore Acoutic Gigs take place at a great little pub called Mick Murphy's. It's an old pub and the owners live in the apartment attached to the pub which is accessed through a door behind the bar. The bartender can pour drinks and nip out back to still keep up with his favorite television program of the evening. The crowd was great and we even had someone who had driven 2 1/2 hours for the night. Thanks again Damian.

The next day we took a leisurely drive through the Slieve Bloom mountains, took a little hike and found a gigantic 5 meter tall fire place in the middle of nowhere. Sorry but this was an unfortunate time for my phone to have died leaving no ability to provide photo evidence. We also climbed the 2nd highest round tower in Ireland. 108 feet tall and built in the 12 century by Monks as a status symbol and also as a beacon for weary travelers to be able to find the monastery and a warm meal. Unfortunately Vikings could also see these towers and were wise to the fact monastery's and churches typically had a fair amount of gold and tithe money kicking around therefore making them an easily spotted target from miles away. 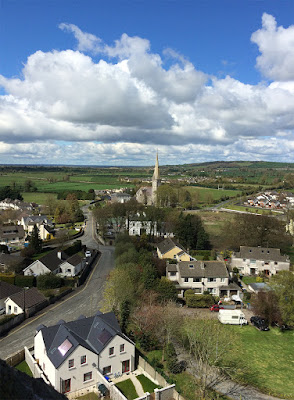 Yesterday was a day off. An off day. Believe it or not it rained for most of the day. Today we'll drive to Galway and you guessed it, it's been raining and is supposed to continue. Galway is a great city. I hope we find a fabulous umbrella store. Tomorrow we'll go to Dublin for the DC Music Club. I'll Tweet Bono later today to make sure he knows he's invited.