A Day in the Life

We flew out of Dublin where to nobody’s surprise it was raining. But to be fair it had been raining everywhere in Europe. The night before was a nice show at the DC Music Club. I found out a few hours before the gig that the DC Club was the Dublin Conservative Club which was where the Music Lee series puts on shows. You rang a buzzer at the door, were rung in and would then proceed down the stairs, over the red carpet, past the mirrors and through the red velvet covered halls that led to the basement level bar and music room. There were snooker tables in the side room and a garden area around back that was visible to nobody outside. I had the feeling that if the show didn’t go well or didn’t draw a crowd I could be disappeared before I finished my post show Guinness. Luckily, I’m writing this….

We flew Aer Lingus to Amsterdam and I happily took a nap for the first part of the flight. I woke groggily and ordered a coffee from the attendant who magically appeared in the aisle and was quickly made aware that coffee on this flight was not free. 3 quid! I think the Aer Lingus folks have been hanging around the Ryan Air folks and the result does not favor the coffee dependent/loves the free stuff kind of traveler. At least it was real coffee and not instant.

We arrived ahead of schedule at Schipol Airport and were greeted by a customs official who was much like the Honey Badger. He didn’t give a sh**. A lightning fast passport stamp and we were off to the Avis counter to retrieve the keys to a well worn Citroen C3…a step up from the quaint little C1. This car, though young in age, had clearly seen it’s fair share of tourists who were surprised at the manual shifting. This was made evident by the nearly non-existing clutch. We cruised up the A1 as fast as possible to Gronigen where we met up with Peter Mulvey and John Statz at the Rhythm & Blues Night. Peter’s agent couldn’t make it to the gig so Jess became his representation for the night…in that she made said claim (Peter said to do it) and we were given a free hotel room. BAM! 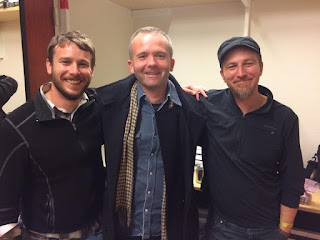 The following day was a gig at Cafe de Amer in Amen.  Great gig with well over 100 of the best folks I’ve seen in a while. It was like negative quiet in that room. We even indulged in their famous meatballs at the break. It’s amazing what a little clove can do the meatball. If you’re into that sort of thing. Then we went to Hilversum and had a nice little rooftop concert with some friendly folks we met last year on a FreeBird Concert run. Thanks Christoff! Again, such lovely people to hang out with. Thank so much Linda!!

Jess is in Greece for a few days and I’m in Amsterdam for a couple shows with the Amsterdam Songwriters Guild. It’s sunny and warm and the gig tonight is a 10 minute walk. These people riding bikes while texting/smoking/rolling a smoke/drinking coffee/chatting over Facetime and avoiding the kids on their souped-up scooters will never cease to amaze me. It is one of the most most terrifying bits of clockwork action I've ever witnessed.