Welcome back to Madison for a Friday night with no show or rehearsal and not too much planned. That would be not too much planned in the short term...very short term. I say this because we spent a great deal of time this week planning out the next 12-14 months. It looks as though this may be one of the last times until my late thirties that I'll have the opportunity to sit and wonder "what will I be doing tonight". In fact, in no way should I be sitting here wondering what I'll be doing tonight. On page 2, paragraph 3, line 6 of our manifesto to conquer the hearts and ears of music fans across the globe it states exactly what I should be doing on the evening of June 22, 2012. However, in the line 5 of said page it also states that I should write a blog entry and update the website and like Meatloaf so wisely once said..."Two Out of Three Ain't Bad".

This will be where I let you all in on a few parts of the scheme, or plan, as it will now be referred. As many of you know we've been traveling a great deal the last couple years. We've been across the USA countless times... mostly in the winter time with blizzards and sub zero temperatures, or the summer time with monsoon like rains, raging flash floods, and tornado warnings. We've had shows in almost all of the continental United States with the exception of a few of the southwestern ones. We've been to England, Ireland, Scotland, the Netherlands, and even to our "just a little northern neighbor" Canada. We've grown to dislike the company of semi trucks on small mountain pass roads and found that the TSA can never quite be satisfied with only ruining your day a little bit. We've learned how a grumpy New Jersey traffic cop doesn't care that you're not from Newark and didn't know to not take a right turn on a green light from Main St. onto Broad St. but did care to issue a $106 citation for performing the maneuver. Also, we've grown to know that it's best to carry a cooler and to pack a weeks worth of lunch and not indulge in the fine truck stop deli delight also known as a microwave burrito. So with all of this knowledge and an acute ability to way the pros and cons of the decision at hand, we've decided to move out of the Chandelier Shack (our apt.). In just a few short months,  this show is going full time.

Well....in October we'll leave for a two month follow up tour of the previously wild and successful "Josh Harty Storms the UK and the Subcontinent Tour". The last tour was absolutely great and this time amidst the assistance of an already groomed relationship with the English Breakfast and a firm grip on roundabouts the Wisco invasion is heading back to the British Isles, the Netherlands, and wait.....drumrollllllllll.....Spain.  After this excursion we'll then embark on a 12 month residency tour of the USA. What this means is that we'll move into a chosen city/region and plant roots, make friends, get established, and play as many shows to as many people as humanly possible for 2 months and then move on to the next destination. We'll begin in and around Atlanta, GA in late December and then head to New York City and New England. After that, Austin, Los Angeles, Portland, Vancouver, and as many other points we haven't yet thought possible. For this, we whole heartedly welcome any and all suggestions anyone has as to where you think we should go. We'll likely already have gone crazy so feel free to leave that suggestion out.

Now I don't want to spoil the excitement or not leave you wanting more so I'll leave further details for later. I would also say that this whole thing past, present, and future is owed to everyone that loves music and supports those playing music, and for your previous and continued support I am immeasurably grateful.

So here's the tour recap according to what we remember on location, in Snohomish, WA. We're currently making a breakfast which consists of potatoes, brussel sprouts, and bacon trying to prepare for the inevitable drive to Boise, ID. We'll start with May 25th in Fargo, ND at Ecce Yoga and Art.
Ecce is a wonderful yoga studio and art gallery in downtown Fargo just steps away from my old apartment. Downtown is also much cleaner than it was when I lived there and hosts a much nicer, and wider, variety of activities than it once did. As it wouldn't be a Fargo show without Brooks West, he joined me for the show and we had a great time. I'll post a few photos from the show as soon as I get them.
This tour marked the first time in about 5 years I'd gone on tour without my manager, the first in 12 that I'd taken a road trip with my dad, and the first in 18 years that I'd had a music adventure with my dad.  Our first stop was was Lemon, SD...not for a show but to check out the petrified wood museum...pretty awesome. We continued to Billings, MT where I hooked up with Parker Brown, Trevor Krieger, and Clay Green for a show at the Yellowstone Valley Brewery. As you may know, these are also the guys I recorded "Nowhere" with a couple years ago. As always it was great to play at the YSVB and great to make music with great guys. The next night we moved on to Missoula, though this time, just me, Trevor, and Parker. Here's a video of rehearsal at Trevor's house...note the random Dylan and Olivia appearances.

Missoula at the Top Hat was fantastic. Trevor and Parker were on the show and I'd be lying if I were to say it wasn't pretty awesome. After the show we had tacos from a taco truck around the corner, punched Trevors car until the headlight started working, and went back to the cabin we were staying at on Bonners Avenue.
The following night, ironically, was in Bonner's Ferry, ID at the Pearl Theatre. Up until 2 years ago it was still a church.
Spokane was my first rooftop show and a benefit for KYRS. Great show and one of the best polenta dishes I've ever had.
Let's see.....a few days off and then Portland at the Alberta Street Pub. I've often wondered what happens to the show bills that are put up in the men's room and left for two years. Now I know. Note my hit song. 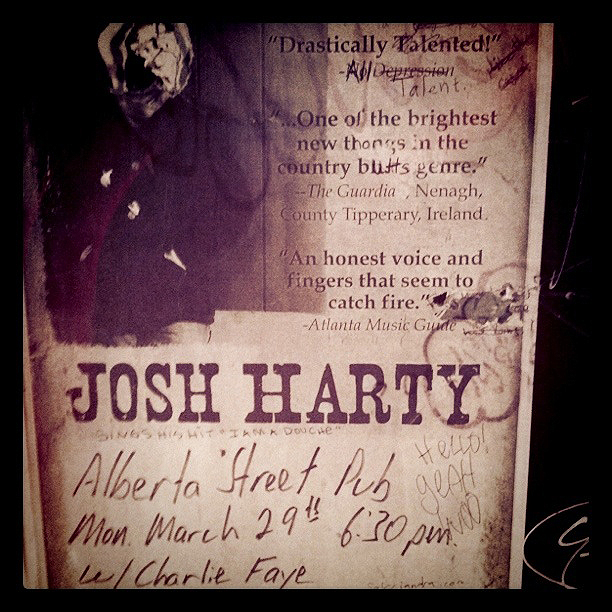 We'll finish the trip in the morning. We've moved on since the beginning of the blog post and are in a motel room in Baker City, OR having some avocado and some trail mix.
Talk to you soon
Josh