Sunny with a chance of Snopocalypse

In Utrecht, Holland and it is supposed to snow...a lot. Well, not a lot in Wisconsin or North Dakota terms but in Dutch terms the apocalypse is nigh. 6-10 inches of the fluffy, white, end of transportation as we know it, reason to get to the grocery and stock up on everything ...snow. Holland does have it's hands full holding back the sea so I'm certainly not going to give the Dutch government any grief, whatsoever, with their handling of the uncommon inundation of snow. I will say, however, that this little snow storm could very well put a little crimp in my style/schedule over the next few days.

We have a show tomorrow night at the University in Eindhoven, which is just a quick 45 minute train ride to the south...usually. If the weather comes as it may, it could cause a bit of trouble. Much like I don't like to take my imaginary Porsche out in the imaginary snow, the Dutch train authority doesn't much like to take it's very real trains out in the very real snow. This could make for a very long walk with a guitar in tow, or an uncomfortable and tense wee waiting period waiting for the trains to run...if they run. Or, it may be just a pleasant little dusting over night and all will be honey and ginger come morning. All Christmas like!

Speaking of trains, we took the Eurostar from London through France and Belgium yesterday, and after 7 hours on the rail.....Voila! Utrecht. Though before that was a show in Birmingham with Amit Dattani at the 6/8 Cafe. Amit's a super nice fella and a killer guitar player whom you should check out. You may also try to catch his show and look forward to the story about the cake. This show came about through Couch Surfing and an invitation from our friend Vangelis- it was pretty awesome. If you're planning a bit of travel and are looking for a cooler way to find your way around an unknown city....www.couchsurfing.org

We then went back to Leicester to hook up with our great friend Mick Smith. We rehearsed a few songs and headed down to John Montauge's club for a great night of music. (By the way, John's club would be in the Top 5 folk clubs in England). There were at least a dozen players, Mick's bluegrass band, Phantom Horse, John Montauge, Bob Cheevers, and the duo known as Mick Smith & Josh Harty. Turns out it was Mick's birthday=awesome night.
The following night I played a set at the Acoustic Knights Club in Sutton Cheney. A great little place out in the English countryside and would certainly be on the list of places to visit when you come to the UK.
Alright,  here come the clouds. I'm going to do my best Captain Dan....
Josh

Before we begin, may I suggest we all put a Traveling Wilburys record on and raise the volume to a reasonable level? Cool, thanks.

We're on a train to Birmingham. It was a late night. I nearly....no, I did loose my patience with the guy at the ticket counter. I think I may be taking a moment to reflect.

The tour, thus far, has been great. We've met an amazing number of people, played some of the best places I could imagine, and reconnected with some wonderful friends. Two nights ago I ate a chip butty. Imagine two slices of white wonder bread surrounding chips(fries), relish, white cheddar, ketchup, and a bit of mayo. Can you imagine the shear bliss of eating such a thing? Just this morning I had a bacon sandwich....yes, a bacon sandwich complete with a touch of brown sauce. Three nights ago we cooked, and indulged in fish pie. Yesterday, while ordering a drink at the Master Builders Pub in Bucklers Hard(yes, the town is called Bucklers Hard) I noticed a look of "what the hell" on Jess's face only to look up and see the owner of the Square and Compass, Charlie, standing in front of me. We spent 4 nights staying with Suzy in West Sussex where I pretended to be 19 again in the company of Will and Alex. We traveled and dined in the New Forest In Suzie's VDub. Last night I had a real American Hot Dog....from a can. Oh, did I mention that all of these previously mentioned happenings took place in the presence of a fire? 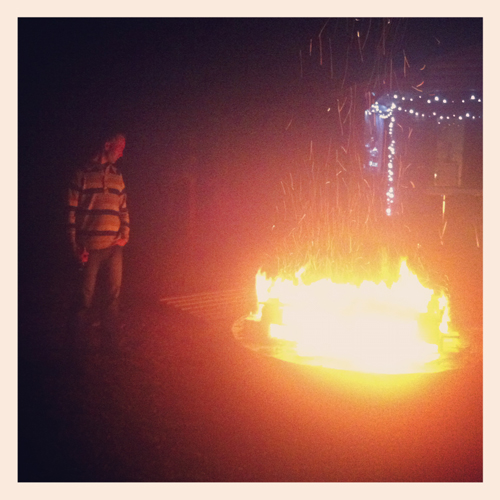 Now, we're on a train traveling across the English countryside, the sky is amazing and we're continually passing by such an incredible amount of history in the form of castles, bridges, farms and country I struggle to define it properly with words. I am also reminded that we've visited more of England than a majority of the people on this train. Then as I think of how tired I am, how weary I can't help but feel at the moment I think I understand why the most folks here take the time to not constantly move around. To keep calm and carry on. I'm a bit jealous.

Tonight, in just a few hours, the cycle continues. I think I understand what Paul Simon was talking about. In fact, I think I might play that song tonight. Though I am tired, I'm honored to have a job which allows be enjoy being tired. I'm also grateful to have and a partner/co-worker/companion/.....

Alright, it's just about time to mind the gap. Turn it up when it gets to track #4.